It is my great pleasure to deliver this final keynote address at the “Youth in Climate Action” Virtual Conference.  My congratulations to the British Council for organizing this virtual conference on a very timely and important topic, especially as the world eagerly awaits the outcome of the COP 26 which is to commence shortly in Glasgow.

Climate change is no longer a looming threat!  It is real and its devastating impacts are being felt the world over.  Increasing in its intensity over the years, climate change has evolved in to an existential threat to many, causing significant damage to life, property, livelihoods and national economies.  It has given rise to new challenges, such as climate refugees and rendered our future uncertain.

The outlook for the world is not promising. In December last year, the Secretary General of the United Nations urged countries to declare a “climate emergency” and at present over 35 countries have responded to this call. The recent report by the Intergovernmental Panel on Climate Change declaring that we are likely to reach the threshold of 1.5˚C increase in global temperatures by the early 2030s and exceed 2˚C this century, is a strong warning for all of us. Unless we adopt stringent measures to limit global emissions, we place entire humanity is at risk, especially the generations that will follow after us.

It is this future that will be inherited by our younger generation, the world’s youth, who make up 1.8 billion of the global population.  According to the United Nations, it is the largest generation of youth in history. Young people, between the ages of 15-35 years are among the most vulnerable groups in society to the adverse impacts of climate change. As such, their participation is crucial in all our mitigation and adaptation efforts and any initiative seeking solutions for this crisis.

1/4th of Sri Lanka’s population are young people. While youth are the most exposed of social groups to the impacts of this crisis, I firmly believe that they could play an important role as advocates and champions of climate action. They have the potential to be creators of innovative and creative solutions and influence official policies.

Young people the world over, including in Sri Lanka, are making significant contributions towards global efforts on addressing climate change. Our young people too have been instrumental in such efforts, including creating awareness, building resilience and capacity and conducing outreach programmes, both at national and international levels. They have also been involved in promoting sustainable initiatives and participating in efforts to protect the environment and ecosystems.

I am happy to note that several government Ministries and agencies as well as other stakeholders work closely with young people on climate change initiatives in Sri Lanka. The Ministry of Environment has conducted the “Youth Forum on Climate Change” to engage young people in climate change awareness creation processes and to build their capacities to address climate impacts. Youth have also participated in several initiatives led by the Climate Change Secretariat of Sri Lanka.

I understand that our youth have also been engaged in Sri Lanka’s contributions to international processes on climate change. We are keen to ensure that youth are provided the opportunity to engage in these global climate policy processes and continue to support those who are engaged in such activities. It is indeed admirable that these youth have been able to highlight at international fora, climate action efforts undertaken by the country and young people such as themselves, thereby confirming the valuable role they play as advocates for climate change initiatives.

Sri Lanka’s youth have continued to shine on global platforms promoting climate action. They participated at the recent “Youth4Climate Summit” which was concluded last month in Italy, as part of the Pre-COP activities. I understand that they were actively engaged in promoting youth positions related to thematic areas of the youth declaration, which will be presented at COP26 on 5th November, during the day of youth in the COP Presidency Agenda. Sri Lanka will also be represented by youth who will be engaged in activities of the COP negotiations, as well as the Conference of Youth which will be held from 28th to 31st of October in Glasgow.

Youth remain one of the key elements in our fight against climate change.  It is imperative that we support them in their efforts to deal with this crisis. I understand that the British Council studies have revealed that the awareness among the young people of Sri Lanka regarding climate, particularly in rural areas, is mostly limited to their personal experiences with adverse climatic conditions. As such, they could benefit from a greater understanding and awareness regarding this crisis. It is our responsibility to ensure that all youth are provided with in-depth knowledge of the implications of climate change, so that they are empowered with the relevant tools to meet this challenge.

This can be achieved by increasing climate literacy and creating spaces for youth to be engaged effectively in climate action related processes.  As such, I understand that the topic of climate change is being considered to be included as a topic in Sri Lanka’s education system by the Ministry of High Education. This is in recognition of the fact that environment and climate related literacy and skills need to be integrated to the education process at all levels.

In addition to the formal education system, the media could also make a substantial contribution towards creating awareness among youth on issues relating to climate change. They could also highlight and support youth action on climate change, especially to carry the message to a greater audience. Such publicity will serve to motivate other youth and also provide them with successful examples of climate action initiatives undertaken by young people.

It is important to recognize the adverse impact that climate change has on different economic sectors and how youth engaged in employment in these areas will be affected.  Climate change will result in new jobs being created and existing jobs to be adapted to suite changing climates, which have an impact on communities and ecosystems.  For example, some youth may no longer be able to engage in traditional livelihoods which their parents practiced such as those relating to agriculture or fisheries, impacted as they may be by climate change.

As such, new jobs such as those relating to information technology and other avenues, such as the creative economy, hold vast potential for young people.  My State Ministry is currently focusing on these new opportunities of employment that are arising for young people, such as those relating to e-commerce or creative economic activities, that are not impacted by issues such as climate change.

In conclusion, I strongly believe that Sri Lanka’s youth have the ability to create innovative and creative solutions to address the impacts of climate change that we could showcase to the world.  To do that, they need our support and encouragement. It is why initiatives such as this virtual conference is so important for today’s youth.

Let me conclude with a quote from Earnest Hemingway:

“The earth is a fine place and worth fighting for.” 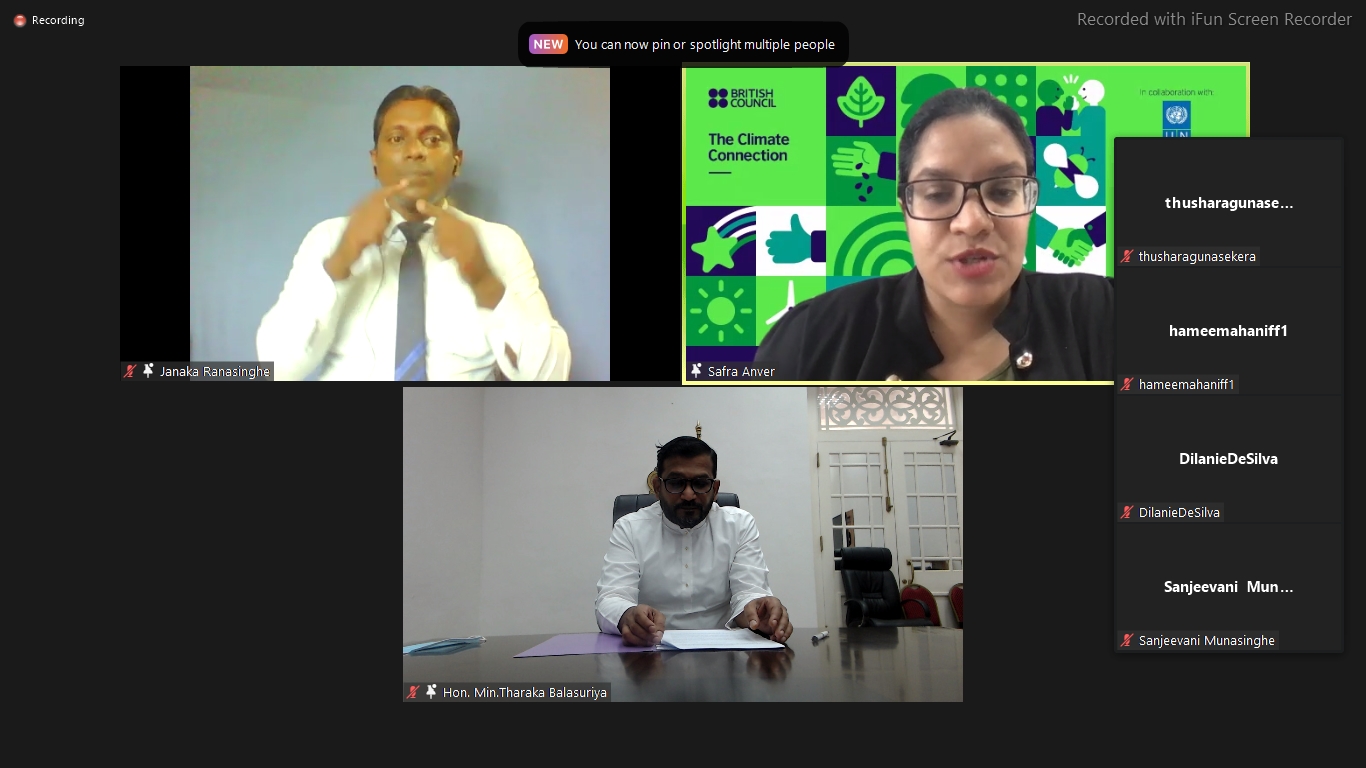 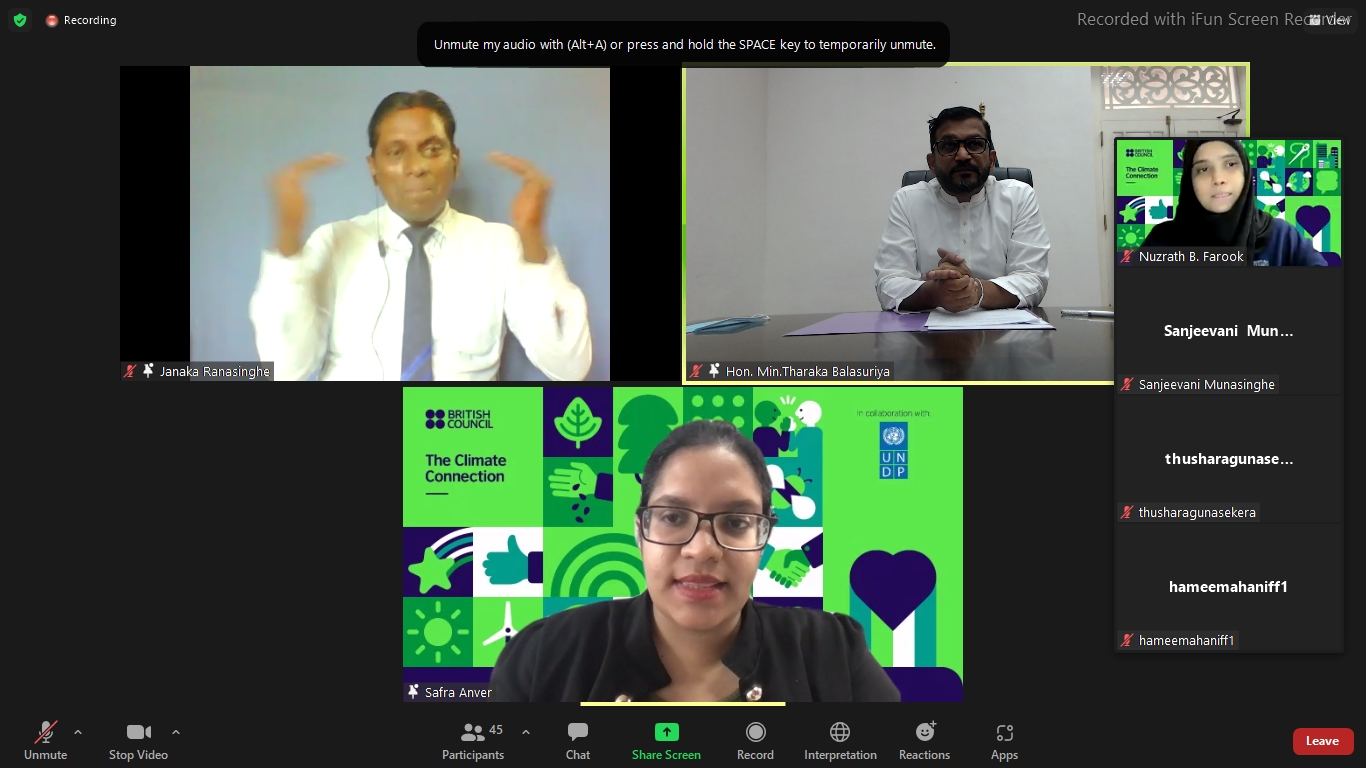